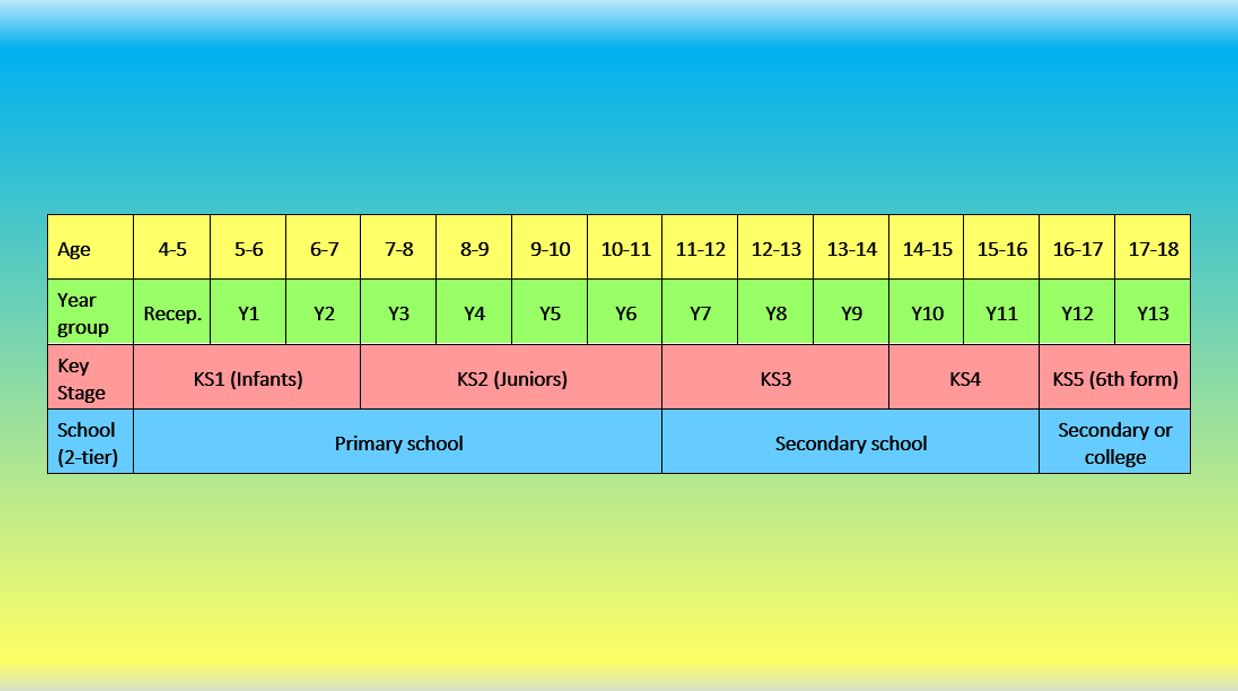 This article is for anyone who wants to get a better understanding of the English school system. For example, if you’re moving to England from overseas (or even just from another part of the UK!) and have a child of school age then you should find it helpful.

Note that only ENGLISH school system is covered here; there is no single BRITISH school system. Schooling in Wales is similar but not identical, and the systems in Scotland and Northern Ireland are different again.

There are two basic types of school in England:

Confusingly, in the English school system a “public school” is not a state school; it’s in the independent sector and so requires fees to be paid. Wikipedia puts it like this: “A public school in England and Wales (but not Scotland) is a fee-charging endowed school originally for older boys that was “public” in the sense of being open to pupils irrespective of locality, denomination or paternal trade or profession.”
In other words, anyone could attend a public school, but only if they were wealthy enough!

Within the state school sector there are several options. Community schools, or local authority maintained schools, are run by the local authority and follow the National Curriculum. Faith schools follow particular religious denominations (usually either Roman Catholic or Church of England, though there is an increasing number of schools promoting the Muslim faith); and academies and free schools are run by not-for-profit academy trusts and have more freedom than local authority schools in what and how they teach, though most still adhere fairly closely to the National Curriculum.

In some parts of the country there are grammar schools, for which entry is very competitive and is based on an exam called the 11 Plus, taken at age 10/11. However, the majority of children attend comprehensive schools – which could be community schools, faith schools, etc. – catering for ages 11-16 or 11-18.

You can find out more about the different types of school here.

The academic year in the English school system starts on 1st September and, in most areas, consists of three terms, each divided into two half-terms. The autumn term runs from September to just before Christmas; the spring term from January to just before Easter; and the summer term from shortly after Easter to around 20th July. There’s a two-week holiday at Christmas and the same again at Easter, and mid-way through each term there’s a week-long half-term holiday. That leaves about 6-7 weeks for the summer holidays.

At state schools the school day typically starts between 8.40 and 9.00am and ends between 3.00 and 3.30 pm. There are 195 days in the school year, five of which are used for staff training, so a child is expected to be at school for 190 days each year.

Independent schools usually have a slightly longer school day, and may have lessons on Saturday mornings too, but they also have longer holidays.

In the English school system, a child normally starts school the September after their 4th birthday, with the Reception class, then goes into Year 1 the September after their 5th birthday. (Technically, the Reception year isn’t compulsory schooling, but very few people opt out.) From Y1, compulsory education continues until Y13, during which students turn 18.

Unlike in some countries, students are not routinely held back to repeat a year if they perform poorly; they normally move on to the next year no matter what.

The timeline is split into a number of Key Stages:

After that comes either work, sometimes in the form of an apprenticeship, or university.

In most parts of the country, children attend primary schools for KS1-2 (up to Year 6) and secondary schools for KS3-4 (Years 7-11). For KS5 they can either stay on at school, or go to a sixth form college or an FE college (FE = Further Education, also catering for adult learners), or perhaps go into an apprenticeship with an employer.

“Sixth form” is technically an outdated term but is still in common use to describe Years 12-13. School sixth forms and sixth form colleges generally focus on academic qualifications, with a few vocational options, while the focus at FE colleges is mainly vocational.

For KS4 and 5 there’s also the option of attending a UTC, or University Technical College, which focuses on a particular area of STEM (Science, Technology, Engineering and Maths) and aims to “bridge the gap between education and work”.

A few parts of the country, such as Worcestershire, use a three-tier school system: these vary but generally involve 4-5 years at first school, three years at middle school, and then the remainder of the time up to Year 13 at high school. (To add to the confusion, some 11-16 and 11-18 secondary schools in other parts of the country have “… High School” in their names!)

Students don’t “graduate” from English schools; their achievement is judged by their exam results.

Towards the ends of Years 2 and 6, all children in state schools take SATs (Standardised Attainment Tests, officially titled “End of Key Stage Tests and Assessments”). Those in Year 2 are quite informal and are assessed by their own teachers, but the ones taken in Year 6 are more formal and are externally marked.

SATs are mainly used for tracking and target-setting purposes; a child’s Year 6 SATs results are used to generate target grades for the exams they will sit five years later, and schools are judged by comparing their pupils’ attainment levels on entry with their attainment in later exams. So there’s really no point in coaching a child intensively for SATs, as an artificially high SATs result will result in pressure on the child to achieve similarly highly in their GCSEs at age 16.

Towards the end of Key Stage 3, students “take their options”; in other words they narrow their subjects down to only the ones that they will be taking exams in in Year 11. English Language, Maths and Science are normally mandatory for all students. (Science can be done in the form of separate GCSEs in Physics, Chemistry and Biology, or as a double GCSE in Combined Science.) Other subjects are optional or are decided by the school.

At the end of Year 11, most students sit GCSE (General Certificate of Secondary Education) examinations, typically in about 8-10 subjects. Some subjects include a coursework element, but in most cases assessment is primarily exam-based. GCSE results are given in the form of a grade between 1 and 9 for each subject, with 9 being the highest possible and a Grade 4 being considered a standard pass.

Maths, Sciences and Modern Foreign Languages are all tiered subjects, with higher-performing students being entered for Higher Tier and everyone else for Foundation. Grades 1-5 are available on the Foundation Tier, and 4-9 on the Higher Tier. If a student doesn’t achieve the minimum mark needed for the lowest grade available on their tier then they get a U (ungraded).

The numerical grading system has come into use since 2015. The chart below shows how the numerical grades relate to the old alphabetical grades. Only the top 20% of those in the 7/8/9 bracket will gain a Grade 9, so it’s harder to achieve than the old A* grade.

The exam boards offering GCSE qualifications in England are Pearson Edexcel, AQA, OCR/MEI, CCEA and WJEC/Eduqas. Each school chooses which exam board to use for each subject, so you might do the Edexcel exam for Maths, AQA for English, OCR for History, and so on.

For Maths, the specification – prescribed by Government department Ofqual – is the same for all boards, though there are a few small differences in how the requirements are interpreted by the different boards. If you’re looking for a tutor for GCSE Maths then just make sure you find someone who is familiar with the Maths GCSE specification for England. Ideally they should be familiar with the exam board that your school uses, but it’s not essential, especially at Foundation level.

For other subjects, however, there can be big differences between the exam boards, so you need to make sure that any tutor you engage is well-versed in your school’s particular exam board. Even then there may be some variation, such as a choice between two specifications or the choice of books studied for English Literature, so your tutor also needs to be comfortable with the options that your school is using.

GCSEs (at Grade 4 or above) are what’s known as Level 2 qualifications. Below that are Level 1 qualifications, which are roughly equivalent to the standard of work typically covered in Year 8/9, and below Level 1 are Entry Levels 1-3, which are of roughly primary-school standard; however, qualifications at these lower levels tend to be offered in adult education rather than in schools.

Independent schools sometimes offer either the Edexcel International GCSE or the Cambridge IGCSE in lieu of GCSEs, but state schools are not allowed to offer these.

The next step after GCSEs is to start on Level 3 qualifications, which are normally completed over two years in the sixth form or at an FE college.

The most popular academic qualifications at Level 3 are GCE A-levels, which qualify the student for university entry. Most students who do A-levels study just three main subjects, usually with some form of enrichment option, which may result in an additional qualification, during at least the first year. Alternatively there are a wide range of vocational qualifications at this level, which may be completed either at a sixth form or FE college, or through an apprenticeship. Some institutions, predominantly independent schools, offer the International Baccalaureate in lieu of A-levels.

Anyone who does not achieve at least GCSE Grade 4 in Year 11 in both Maths and English Language is required to keep working towards those qualifications, alongside whatever else they are doing, until they are 18.

Level 3 qualifications give you UCAS points, which are used for university entry. (UCAS = Universities Central Admissions System.) You can find out more about the UCAS points tariff here.

As a Maths specialist, I can talk about other subjects only in general terms, but if Maths is what you need help with then please take a look at what I have to offer.

And a few relevant blog posts:

As you can see, the English school system is quite complex and this article really only provides an outline, but the various links will give you more information about any areas of particular interest.