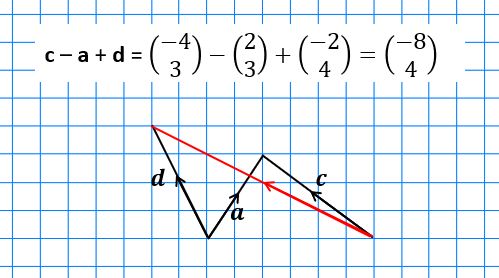 Vectors for GCSE Maths is one of the topics that people tend to find hardest. Some questions are very challenging even for the strongest students, but getting to grips with the basics isn’t so difficult. In this article we’re going to cover the Foundation content, and the next post will cover the Higher material.

A scalar quantity is just a number; it only has magnitude (size, e.g. length of a line).
A vector quantity has both magnitude and direction. It is usually represented on a diagram by a straight line with an arrowhead to indicate direction.

We can also give the vector a lowercase name; let’s call it a. This uses bold type to indicate that it’s a vector; if you hand-write it then you should underline it.

Since it’s on a grid it can be written as a column vector:

– which means 2 to the right and 3 up.
The top figure is always how far to the right you are moving, and the bottom one is how far up – so if you’re moving to the left or down then the relevant value will be negative.

only describes the movement from point O to point A, but a or the column vector form can be used anywhere.

How could you describe the movement from A to O as a vector?

A vector can be multiplied by a scalar. For example, if you were to go from O to A and then carry on for twice as far again, then you’d have moved by vector

The 3 is called a scalar multiple, and

could also be described as 3a or

If one vector is a scalar multiple of another then the two vectors are parallel.

Vectors can be added by placing them end-to-end.

So to find a+b we take a copy of b and add it to the end of a. Let’s call the point that it takes us to, P. The red arrow shows the resultant vector – i.e. the direct route from the start point to the end point of the combined vectors.

(Of course, b+a, with a added to the end of b, would give the same result – note the parallelogram shape.)

and you can see that this matches the vector

, shown in red on the grid.
(If you’re working in all one colour then you can use a double arrowhead ↠ to denote a resultant vector.)

So you can work out the sum of two column vectors without actually having to draw the diagram.

What about subtracting vectors?

To find a – b we need to put b on the end of a, but back to front… so you’re going forwards along a and then backwards along b. Again, the red arrow shows the resultant vector.

This time we have

and you can see that this matches the resultant vector on the grid (3 to the left and 4 up).

Again, you don’t actually need to draw the diagram to subtract one column vector from another.

Going back to parallelogram OAPB, above, how could you describe

And in column vectors that’s

When adding and subtracting vectors you’re not restricted to just two; you can add and subtract as many as you like, simply by putting them end-to-end in the correct orientation.

Here’s a reminder of the column vectors from the first set of questions:
a =

Find the resultant of each of the following combinations of these vectors, also drawing each combination on squared paper:

If you’ve found this article helpful then please share it with anyone else who you think would benefit (use the social sharing buttons if you like). If you have any suggestions for improvement or other topics that you’d like to see covered, then please comment below or drop me a line using my contact form.

On my sister site at at mathscourses.co.uk you can find a great-value suite of courses covering the entire GCSE Foundation content, and the “Flying Start to A-level Maths” course for those who want to do well at A-level – please take a look!

Examples of vectors parallel to b are