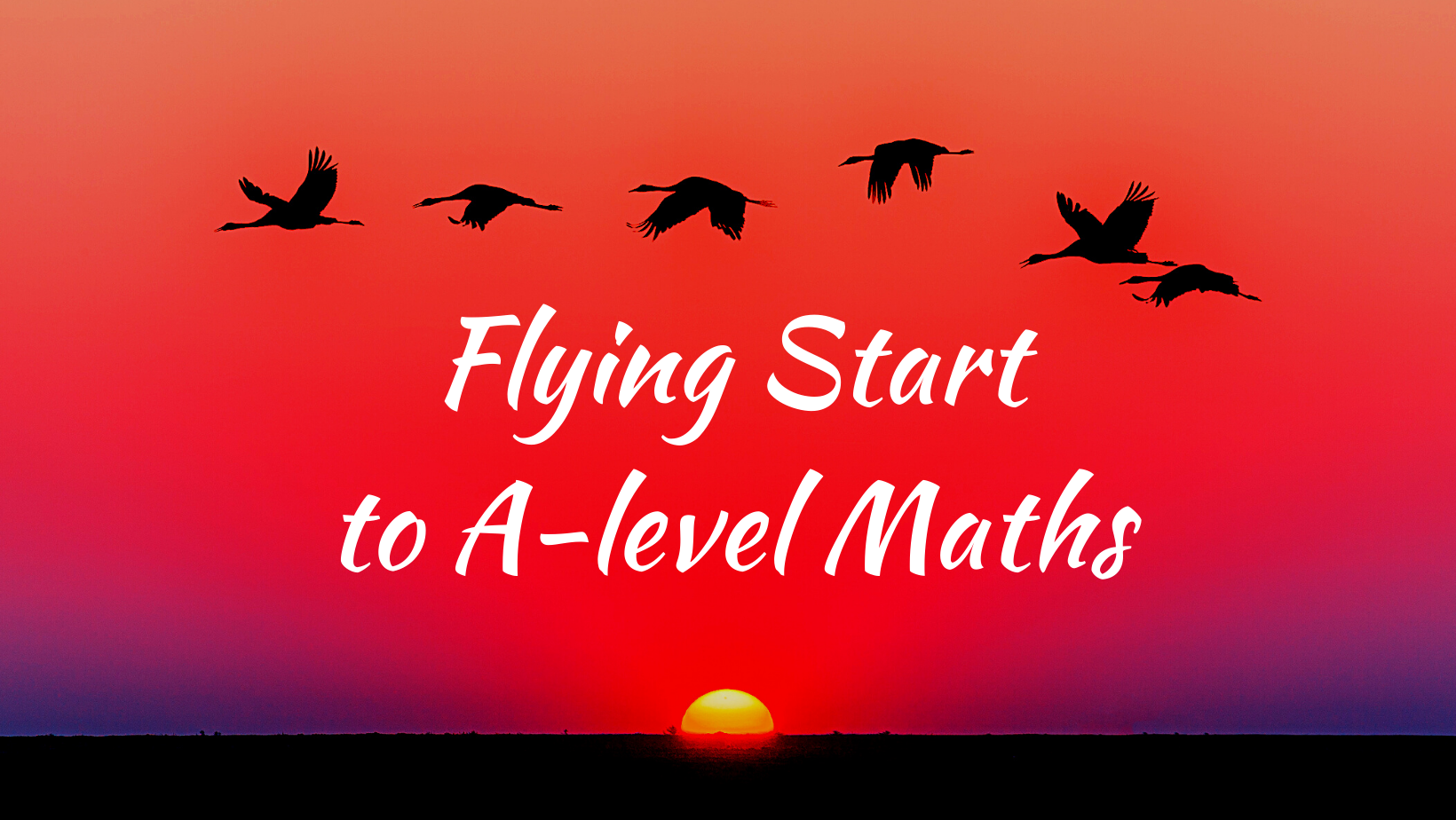 Are you starting sixth form this year? Want to know how you can make a flying start to A-level Maths? Here’s some guidance to help you ease your path and make a success of your studies!

As anyone who’s done the A-level Maths course will tell you, it’s pretty intense right from Day One.

If you can make sure that you’re fully up to speed on the aspects of GCSE Maths that the A-level builds on, then you’re going to find the course much easier going.

Step 1: Be sure you’re making the right choice

First of all, do give some consideration to whether A-level Maths is for you.

There’s a blog post here that goes into a lot more depth about the sixth form options and whether A-level Maths is likely to be a good choice for you.

Let’s assume that you’ve already given the matter due consideration and you’re ready to do what’s needed to make a flying start to A-level Maths!

Not everything in the GCSE features in the A-level, so – once your GCSE is out of the way – try to focus on only the topics that you’re actually going to need.

You’ve got to be comfortable with fraction arithmetic. That may seem pretty basic, but you’ll be doing a lot of work with algebraic fractions, and ordinary fractions work underpins that. It’s surprising how many new Year 12s can’t remember how to add two fractions with different denominators!

You need to be fluent with surds and indices, including negative and fractional indices, and converting between forms; for example you should know that

You’ll need your knowledge of vectors, as they’re often used contextually in Mechanics questions. You do get the occasional pure vectors question too, but those are usually no harder than you get at the top end of GCSE.

Just about everything you’ve ever done in algebra and trigonometry will be needed, including all the graph work – algebra and graphs really are the backbone of A-level Maths, and trig is a big element too.

If you did the OCR/MEI GCSE then you may not have covered f(x) notation for functions, but Edexcel and AQA do include it, so if you’re going to a sixth form where most people did one of those exam boards then the teacher might assume that everyone is familiar with it.

The topics listed so far come under the banner of Pure Maths; then there’s the Applied Maths, which consists of Statistics and Mechanics.

Under Statistics, the work that you’ve done on populations, sampling, averages and spread will come into your A-level studies, as will histograms, cumulative frequency curves and box plots. (If you did Edexcel IGCSE then box plots aren’t on your spec, but if you’re going to a sixth form where much of the student intake comes from a GCSE background then you might find that they are assumed knowledge.)

Probability also comes under Statistics, and everything you did on that at GCSE is in the A-level too.

For Mechanics, you’ll need to call on your knowledge of travel graphs (distance-time and speed-time, or displacement-time and velocity-time), and the work you’ve done in Science on forces and Newton’s Laws of motion.

As I’m sure you’ve been told countless times, the most effective way to improve your maths skills is to DO lots of maths! Watching videos is all well and good, but what really makes the understanding stick is working through questions, comparing with the answers you should have got, and re-working any bits where there’s room for improvement.

It’s also really helpful to revisit each topic after a few days, and then again after about three weeks, in between studying other topics. That’s called interleaving, and it’s a very effective technique for embedding the knowledge and understanding in your long-term memory.

You’re going to need these independent study skills for A-level – if you want to achieve your potential then you should be spending roughly the same amount of time on independent study for each topic as you spend in lessons – so you might as well get started now!

There are hundreds of sites out there offering free resources – this blog post lists a selection that you might find helpful – and between them, if you’re happy to do some digging, they’ll provide just about everything you could need.

But if you want a course that’s specifically designed to bridge the gap between GCSE and A-level, focusing purely on the topics that you’re going to need, then you might like to take a look at my Flying Start to A-level Maths course. With the “Self-paced Silver” version, for less than the cost of a single hour’s 1-to-1 tuition you get:

… and since a lot of the content is the top-end GCSE material that schools often don’t have enough time to cover in depth, if you start early enough then it will also help you to hit those top grades at GCSE!

The course is also available in two other variants: Guided Gold (runnning from mid-June until late August) and Personal Platinum (can start at any time, subject to the availability of a slot).

It’s very tempting, once your GCSEs are out of the way, to relax over the summer and not do any study at all. A few people can get away with doing that, but most, when the A-level course hits them in early September, will wish they’d put a bit more effort into preparing!

If you can put that effort in now then you won’t be having to play catch-up when you start sixth form and find gaps in your knowledge that need to be filled in. A bit of effort over the spring/summer will make your life a lot easier in the autumn, and get you that flying start to A-level Maths!

If you’re a student who’s about to go on to sixth form, what subjects are you planning to do and how are you preparing for them?

If you’re already an A-level student or beyond, what tips would you give someone who’s about to start their A-levels, especially Maths?