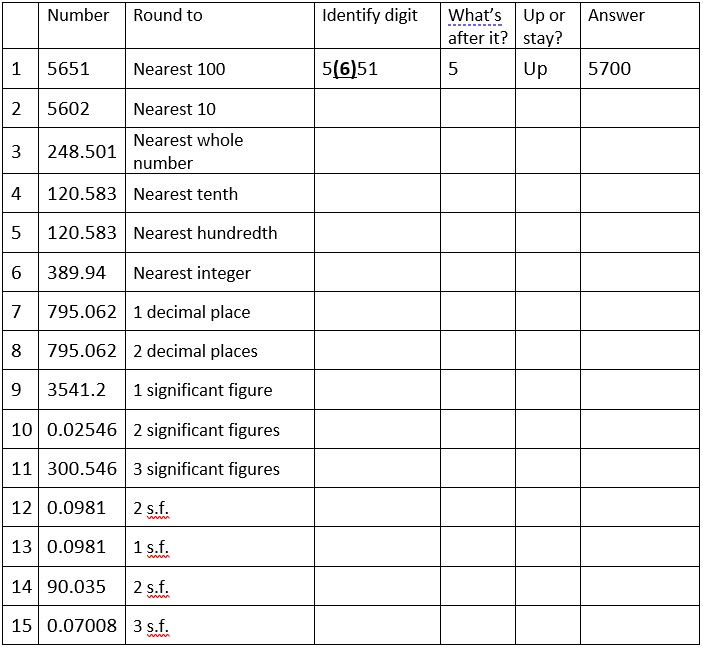 For both Foundation and Higher GCSE – and also for other Level 2 Maths qualifications – you need to know how to round numbers:

How to round numbers by place value

The first two categories could also be described as rounding by place value .

How to round numbers to the nearest whole number (integer)

Now we need to decide whether the number we have is closer to 12,345 or 12,346. To do that, look at the digit AFTER the one you’re interested in. If that next digit is 5 or more then that tells us that we’re at least half way to the next whole number, so we should round UP.

How to round numbers to the nearest ten

To round to the nearest ten, identify which is the tens digit.
On the image above, it would be the 4.

Now we need to decide whether the number we have is closer to 12,340 or 12,350. Again, look at the next digit AFTER the one you’re interested in. If that next digit is 5 or more then that tells us that we’re at least half way to the next tens digit.

How to round numbers to the nearest hundred

How to round numbers to the nearest tenth

(No need to pad out with zeroes in this case, because we can already see where the decimal point is.)

Rounding to a specified number of decimal places (d.p.)

Rounding to a specified number of significant figures (s.f.)

This is a little harder to get to grips with. The tricky bit is identifying which digit you’re interested in. Once you’ve done that, it’s just the same as the other approaches.

When dealing with decimal places, DO NOT add any extra zeroes at the end, or it makes it sound as if you’re being more accurate than you actually are. Remember, extra zeroes are only needed to show the positions of the digits in relation to the decimal point.

This video lesson, showing you how to round numbers, is an extract from my Grade 4 Essentials for GCSE Maths course (Number & Ratio module). You can read more about the course on this page, and find the course itself at mathscourses.co.uk.

Now that you know how to round numbers, you can use this table for more practice. It’s entirely up to you whether you use all the columns; if you’re confident going straight to the answer column without filling the others in then that’s great.
Answers below.

Now that you’ve got rounding sussed, the next stage in this topic is working with upper and lower bounds, which I cover in this blog post.

Have you found this post helpful? If so, please let me know by commenting below, and share it with anyone else you know who might find it helpful.

What other Maths topics would you like to see me cover in my blog posts? Comment below and let me know.